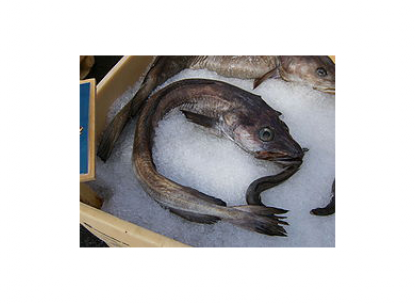 The blue ling is a medium to large sized, very long and slender codfish. Usual size in catches is 70 to 110 cm, but the largest individual caught in Icelandic waters measured 153 cm. It is found all around Iceland, but is much rarer in the colder waters north and east of the country. It is primarily a deep water fish, found in the depth range of 130 to 1500 m but mostly at a depth of between 300 and 800 m. It is found in European waters from Murmansk and into the Mediterranean Sea. It also occurs around the Faroe Islands, and has been reported in waters off southern Greenland and on the Grand Banks, off Canada.

Blue ling feeds primarily on other fishes, but also, to a lesser extent, on benthic invertebrates. Spawning takes place in deep waters off the south and west coasts, from February to April. Growth is rather slow and the fish reach sexual maturity at the age of 9 to 11 years, measuring 75 to 90 cm. The blue ling can reach 20 years of age.

Blue ling catches were initiated by German boats after 1960. Icelandic catches first reached more than 1,000 tonnes in 1978 and soon after, the blue ling was almost exclusively fished by Icelandic boats. With exceptions, Icelandic catches have been between 1,000 and 2,000 tonnes annually. The peaks seen in catches between 1980 and 1984, and between 1992 and 1994 were because spawning aggregations were found: the current increase is because of a growing stock. The blue ling is mostly bycatch in redfish fisheries with bottom trawl. Most of the fisheries are in autumn and early winter along the continental shelf break to the south and west of the country.